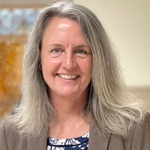 Mayor Barbarann Keffer took office as Mayor of Upper Darby on January 6, 2020, after serving for the prior six years as a Councilperson at-Large. Mayor Keffer’s top priorities are reform, reinvestment, and revitalization into all levels of Upper Darby’s community and administration.

Mayor Keffer has also worked for a state representative’s office, handling constituent services and event planning.  She is a Certified Borough Official through the Pennsylvania State Association of Boroughs and has worked in municipal administration for five years. Additionally, she serves as a board member for the Pennsylvania Municipal League and the Community Action Agency of Delaware County. Mayor Keffer has a strong commitment to professional development and encourages it within her administration. In just the last two years the Mayor has attended many conferences including PELRAS 2022, Mayors Conference at Harvard, the Elected Officials leadership training program, and the Fiscal Management Strategies for Local Government Officials.

Prior to serving as an elected official, Mayor Keffer advocated for a single-stream recycling program and won a Bank of America Neighborhood Excellence Award, using the proceeds to purchase over 60 trees, which have been planted through township parks as well as district and private schools.

Mayor Keffer, a first-generation college student and daughter of a mail carrier and a grocery store clerk, graduated from Harvard University with a degree in Government. She is a four-time All-Ivy League basketball player who went on to play professionally in Ireland and Germany.

Barbarann lives in Upper Darby with her husband and their two daughters.

Upper Darby: The World In One Place

The goal of the motto is to celebrate Upper Darby’s diversity and also its history, location and natural resources. Every type of business, culture, housing, transportation and/or anything else you can imagine, you can find in Upper Darby.

REFORM our local government, REINVESTMENT in our community & REVITALIZATION of our neighborhoods and business districts.

MISSION: The mission of Upper Darby is to be a world class provider of municipal services and a destination community for residents, businesses, and visitors. This is accomplished by modernizing, reinvesting in, and revitalizing our programs and services to support welcoming neighborhoods, thriving business districts, and vibrant public spaces.

REFORM: Incorporate 21st Century technology to update and synchronize our various departmental capacities, to create data-driven sustainable and accountable systems and to  communicate effectively with residents and business owners.  Incentivize professional development within all departments.

REINVESTMENT: Secure funding opportunities to upgrade our public spaces and township facilities with an eye towards environmental impact and long-term sustainability while also evaluating on a consistent basis municipal services looking for ways to improve their quality.

REVITALIZATION: Foster and support programs which already exist such as Business Improvement Districts and Economic and Community Development Corporations.  Work with nonprofits, like Septa and Habitat for Humanity, as well as state government entities and civic organizations, to enhance our efforts to beautify neighborhoods and business districts.

From the Home Rule Charter

The citizens of Upper Darby Township elect a mayor to serve the Township as the Chief Executive. The mayor, a part-time position, is responsible for executing the ordinances and the day to day administration of the Township departments.

The elected term for the Mayor is four years with no person serving for more than three successive terms. The Mayor must reside in the Township for at least one year prior to and while in office.