Upper Darby, located in Delaware County, is the sixth largest municipality in the state of Pennsylvania. Originally Lenape land, the area was first colonized in 1650 and established officially as Upper Darby in 1736.

Over the years, it has grown substantially, with a population of roughly 85,000 as of 2017. Throughout that time, the township has been home to a host of talent. Actress and comedian Tina Fey, singer songwriter Jim Croce, instrumentalist Todd Rungren all grew up in Upper Darby. Hit’s such as the David Bowie Live Album in 1974 and scenes from the 2011 movie Silver Linings Playbook were recorded in Upper Darby as well.

Today it has a foreign born population of 24%, higher that it’s neighboring city of Philadelphia and rivaled only by New York city resulting in the township’s reputation as holding ‘the world in one place.’ The community is just as walkable as it’s more urban counterparts, with a fully functional public transit system and a host of fascinating places and events to visit. There is something here for everyone, but there are a few must sees in Upper Darby. We’ve compiled a list of them below:

Located in Upper Darby’s very own Tower Theater, this immersive exhibit allows visitors to experience the world famous artist’s work interactively. Through a combination of traditional galleries, 3-D visuals and virtual reality technology, attendees can gain a better understanding not only of Van Gogh’s iconic works, but also of his life.

This self-guided tour of the township’s historic ties to the underground railroad leads visitors to important landmarks such as Sellers Hall and the Garret House among others which played an important role in the lives of hundreds of Black men, women and children who passed through these properties. The walking tour takes roughly an one and a half hours to complete and the virtual guide can be viewed here.

Organized by the municipality, the International Festival consists of a multitude of musical performances and street vendors representing the diversity of Upper Darby’s roughly 85,000 residents.

One of the most successful youth theater groups in the country, Summer Stage is approaching it’s 47th season in the summer of 2022. The group consists of many different programs for both kids and adults from all over the greater Philadelphia region and take place at Upper Darby High School.

The Swedish Cabin in Upper Darby is one of the last still remaining original log cabins in the United States. Built sometime between 1630 and 1650, the first Swedish settlers in the area, it has remained generally undisturbed for hundreds of years. Located along Darby Creek, a visit to the Swedish Cabin is an easy and fun way to explore early American History.

This Korean grocery giant is not just any Asian supermarket. Offering a wide range of produce, meats, and cuisines including Chinese, Japanese, Thai, Indonesian, Filipino, and Central American, H-Mark also boasts a full food court with prepared meals and other shops for high end appliances as well as kitchen tools. 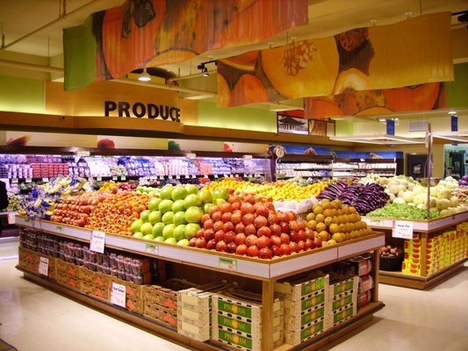 The McClatchy building, located at the cross section of 69th and Market in Upper Darby is home to a multitude of Art Deco and early 20th century commercial architecture. The building itself is covered in hundreds of thousands of terracotta tiles in an array of designs and first opened its doors in 1928. Originally a shopping center, the is now an iconic part of Upper Darby and a must see when visiting.

Art deco on the outside of the McClatchy building

Upper Darby is home to a whole host of parks and trails that are great for running, biking, or walking. Naylor's Run, the Darby Creek trail, and Kent Park which is also home to a scenic fenced in dog park are easily accessible and offer a picturesque respite from the bustling center of this Philadelphia suburb.

The Upper Darby Township motto reads, appropriately, “the world in one place,” and the most notable evidence of this is through its food scene. Boasting an array of cuisine from Asian to African to Latin American, and more–with vegan and vegetarian options widely available too–there is little in the way of food that you can’t find.

A locally owned food stand at the 2021 International Festival

Greenhorn Gardens is a family run, urban farm that holds a farmers market Friday through Sunday out of the historic Arlington Cemetery in Upper Darby. Opened in 2019 by local couple, Sean and Stacey McNicholl, all produce is grown in a geometric greenhouse constructed on the cemetery grounds. It closes through the winter but reopens again in March, selling everything from fruits to veggies and donates any of the unsold produce to local churches and food banks.

Inside the greenhouse at Greenhorn Gardens

The home of Greenhorn Gardens, Arlington Cemetery is a sight to see all on its own. Located in the Drexel Hill area of Upper Darby and recognized by the National Park service, Arlington is a historically designated stop on the Underground Railroad. The cemetery was founded 1895 and covers 130 acres.

The funeral home in the historic Arlington Cemetery